The Basilica minor, dedicated to St. John the Apostle in Oleśnica is one of the oldest Silesian churches. Most likely it existed as a wooden chapel already in the 12th century. The church was first mentioned in 1230. When the castle became a residence of dukes, the parish church became the castle’s churchthat is the church of the dukes of Oleśnica, who were participating in expanding it. In the 15th century during the time of Oleśnica’sPiasts, it became a brick basilica with three aisles and in that form (with many renovations), it survived till our time.

On the galleries,ambo, gravestones, and church’s walls there werecoat of arms that reminds Podiebrad’s Family, their genealogy and over 150 years of their presence in the castle’s church. The chained library created in 1594 by Charles II praises them as well. The library exists in the same room till today.

The Wirtembergshaverenovated the church after The Thirty Years’ War. Thanks to them the church has been equipped with thebeautiful pipe organ with musical choir (1686), the chapel with Wirtembergs’ crypt that was added to the south wall of sanctuary (1700) and included 24 sarcophaguses, the main altar (1708) and the dome of the church’s tower (1754).

The church luckily survived the fires that burned down the city, especially the one from 1730 but its construction could not stop the time and it was getting aged. In 1905 during church renovation the vault of the main and south aisles collapsed and demolished a vast part of the historic interior. Till 1907 the renovation plan was drawn up, and the money was collected. The rebuilding and renovation of interior was finished in 1910. 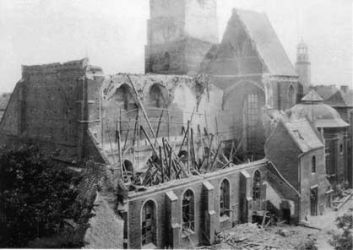 After 1945 the church became again a catholic church. From 1990 WładysławOzimek, the mitered prelate and WiesławPiechówka, the conservator-restorer conducted renovation works. Their aim wasto bring back the glory of the church, its catholic spirit and to restore the artistic vision of the artworks that decoratedthewalls. Since 1998 The St. John the Apostle Church in Oleśnica was bestowed the title ofThe Basilica Minor.