The Column of The Golden Wedding anniversary

The Column of The Golden Wedding Anniversary is placed at the KsiążątŚląskich Square and is the oldest monument in Oleśnica. It was erected to celebrate the 50th anniversary ofCharles Christian Erdmann, The Duke of Württemberg, and his wife Marie Sophie Wilhelmine ofSolms-Laubach. It was unveiled in 1791. The monument was designed by architect K.J. Leyser, built by J.M. Blacha.

The Column of The Golden Wedding Anniversary before 1914 and after the renovation in 2002. 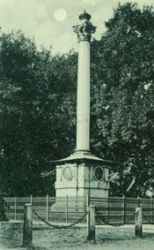 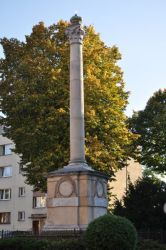 The classical form of the monument is created by a Corinthian column made from a sandstone and placed on the squared stone base. The column supports the ducalmitre. Each base’s wall was embellished with bronze medallions. On the marble stone below each medallion, there were inscriptions about the jubilee.
The medallions depict: a profile of the duke’s couple, coat of arm of The Duchy of Württemberg-Oels; duchess’ coat of arm; and the last one - the royal couple’s monogram. It is unknown what has happened with the bronze inscriptions - these are not visible on the photographs from the beginning of the 20th century. The whereabouts of the medallions are also unknown - they could have been taken off in 1944 and melted for military purposes or removed after 1945. In 2002 the monument and its surroundings were fully renovated.

The Victory Column is located at the entrance to the town halland was erected in 1873 to celebrate the victory of Prussia over France. It was designed by C. J. B. Lüdecke. The classical scheme of a Corinthian column on a rectangle pedestal was used.The column supports a statue of the winged Nike,the Victory Goddess coming down to the earth. She is holding a laurel wreath in the right hand and a palm leaf in the left one. The sculpture that was later casted in a zinc and aluminumalloy was created by a sculptor A. Wittig. There were marble medallions on the pedestal’s walls. The one at the front presented a relief of The Iron Cross distinctions, the other ones were covered with German patriotic inscriptions. The medallions were removed after 1945.

The Victory Column before 1914 and after the renovation in 2000. 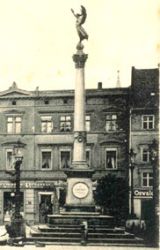 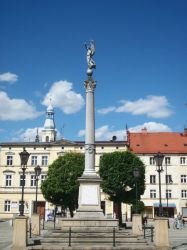 In 1964, in the place of the round medallions,the rectangle bronze plaques were added. They were to memorize The Millennium of the Polish State and the 20th anniversary of the Liberation of Oleśnica. In 1983 during a strong storm the statue of Nike felt down and broke to one hundred pieces. After the pieces were put together again the copy was casted and put back on the columnin 1989. The renovated original of the sculpture was given to the museum in The Oleśnica’s Castle. In 2002 during the renovation, the plaques were removed and replaced with marble ones with no inscriptions. The lanterns resembled those from before 1945 were installed in the four corners by the monument.

The Monument of the Polish Combatants 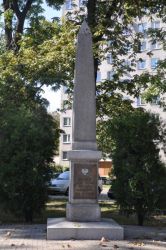 It is located on The Polish Combatants’ Square. It has a shape of an obelisk placed on a rectangle base. There is a metal plaque with inscription: TO THE COMBATANTS AND FORMER POLITICAL PRISONERS. THE SOCIETY OF THE OLEŚNICA’S REGION. It is a former Peace Monument that was erected in 1899 and dedicated to the memory of Prussian-Austrian war of 1866. After 1945the German inscriptions were removed,and it was placed on the isle at the crossroads of WojskaPolskiego and Klonowa Street. In 1960 it was named The Monument of The Association of Fighters for Liberty and Democracy. When the traffic at Klonowa Street intensified the isle was removed, and the monument was moved to the square at this street.After 1989 the purpose of the monument was changed, and it became a Combatants’ Monument. Since then, the square got the same name - The Polish Combatants’ Square. The celebrations of Polish national holidays take place at that square. 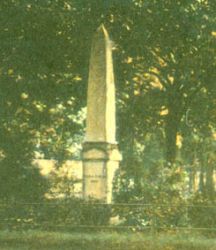 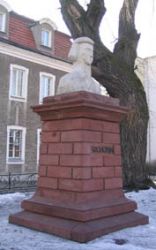 Frederic Chopin’sMonumentis in front of the building of The First Grade Music School, the former Widows’ House. The composer’s bust was made in 1963 by Bogdan Hofman from the State Secondary School of Fine Arts in Wroclaw. The monument’s base was originally a part of the monument of Otto von Bismarck theGerman Chancellor, which was in the same place in 1899.

The Chancellor’s bronze sculpture was ceremoniously removed in 1944 and melted for the military purposes. The base, created by a stonecutter from Oleśnica, was reused many years later. 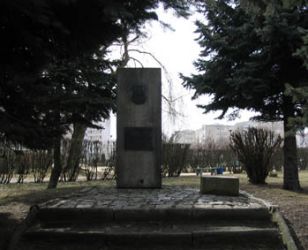 This monument located at The Polish Army Square commemorates the presence of The Second Polish Army, especially the units of The Third Air Defense Division in The Oleśnica’s region. Those units covered the Oleśnica’s railway station from the attacks of German Air Forces.The monument was unveiled in 1976. The casted plaque said: UNITS OF THE THIRD AIR DEFENSE DIVISION FROM 24.03 TILL 7.04.1945 COVERED THE OLESNICA’S MAIN STATION WHERE RAILWAY TRANSPORTS FOR POLISH ARMY WERE UNLOADED.

The Monument of Cosmic Era 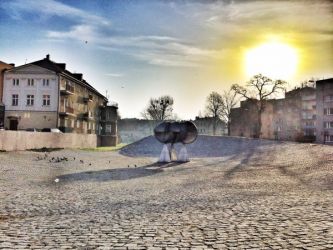 The Monument of Cosmic Era is located at 3 Maja Street. It was placed in a former city’s moat in 1972 (according to monument’s designer it was 1969). The monument consists of a stoned basin lined with basalt pavers and an aluminum construction. It was design by a sculptor Jerzy Baroń from the Academy of Fine Arts in Wroclaw who cooperated with prof. AlojzyGryt. The sculpture was made in The Rail Rolling Stock Repair Workshops (Polish: ZNTK) in Oleśnica.

The inscription on the former historic citywallssays: ON THE 12.04.1961 FROM THE TERITORY OF THE SOVIET UNION, THE FIRST MAN JURIJ GAGARIN STARTED HIS VICTIOROUS JOURNEY TO CONQUEST SPACE. HONOR AND GLORY TO THE HEROIC SPACE CONQUERORS. The inscription did not last till our times. It is the only monument in The Lower Silesia region that memorialize the space expeditions. It was renovated in 2007. 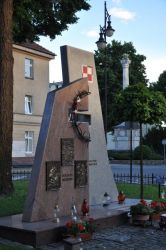 Golgotha of the East Monument

The monument is located next to The St. John the Apostle Basilica Minor. It was unveiled in 2003. There is an inscription Golgotha of the East, and three reliefs featuring the tragic life of Poles exiled to the East of the Soviet Union placed on the stone board. The monument and reliefs were designed by WiesławPiechówka, an Oleśnica’s artist. 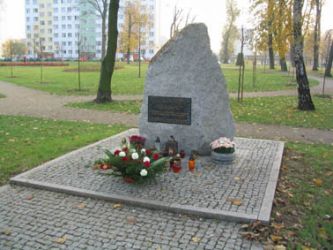 The stoned monument - Memory of Generations Monument was located at the beginning of Cmentarna Street in 2007. It is a symbol of the memory of the former German citizens buried in the cemeteries of Oleśnica. It was designed by prof. AlojzyGryt from The Academy of Fine Arts in Wroclaw. There is a quote from prof. Tadeusz Kotarbiński in Polish and German on the plaque that says: THE PAST SAVED IN OUR MEMORY BECOMES A PART OF THE PRESENT [own translation]. Below there is a signature: IN TRIBUTE TO THE PAST GENERATIONS. THE CITIZENS OF OLESNICA- 2007.