The Baroque catholic Church of the Holy Trinity is the youngest sacral monument in Oleśnica.

Only thanks to the commitment of priest L.J. Pientag, dedication of the local Catholics (approx. 100 people) and support of Charles VI, The Holy Roman Emperor, in a city like Oleśnica where protestants supported by The Duke of Oleśnica were against it, the church could have been built. The construction works took place between 1738 and 1744, however the finishing works have been continued in the next years.

The current view of The Holy Trinity Church 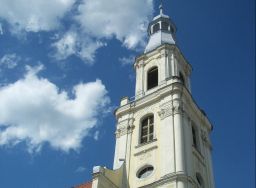 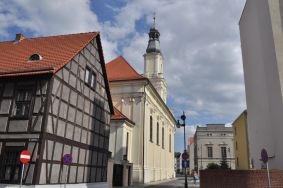 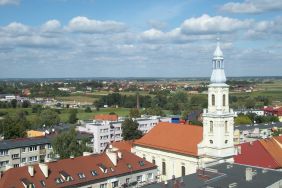 The church was painted in 1748 and then the work was continued by Anton ErazmBeüer (?),who between 1750 and 1755 painted the main altar in an illusionistic style, the vault of apse, the main aisle, and other paintings on the church’s walls. In 1776 the tower and its helmet wereelevated. In 1783 the organs were built and ten years later the west church porch. The existence of the church influenced the number of the followers. In 1854 the church became a parish church.

In the 20th century the number of Catholics increased (to above three thousand) therefore the church had to be expanded. For this reason, in 1935 the old clergy house that was attached to the church along Kościelna Street was demolished. It was replaced with the side hall of the church in the Baroque style. The church could now accommodate approx. 1000 seated and standing places.

In the former Wende’s Asylum the clergy house was established. The building survived till our times. In 1945 the side hall of the church burnt down and after thatthe whole church. Only fragments of the side altars with figures andthe main altar with ambo were saved. Those elements now renovated and decorated adorn the church’s interior.

Burnt down church with a collapsed roof and burnt tower. State as of 1958 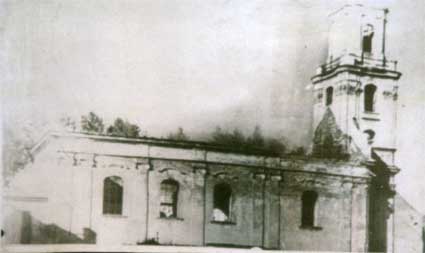 Between 1958 and 1959 the church was decluttered, new roof was built, and the rest of the church was renovated. The contemporary paintings on church’s vault were done by Jan Molga with collaboration with priest Kazimierz Fedyk between 1960-1963. The side hall was also rebuilt. It serves now as a classroom for religion lessons. In 2002 thanks to priest Władysław Ozimek the renovation and revalorization has started. It was conducted by Wiesław Piechówka. The works were finished in 2005.

The church has a status of the filial church of The Roman-Catholic parish of St. John the Evangelist.