The Dormition of The Mother of God Orthodox Church

The church dedicated to The Blessed Virgin Mary and St. George is one of the most interesting examples of the sacral architecture in Poland. Until 1505 those were two separate Gothic abbey’s churches that existed next to each other. 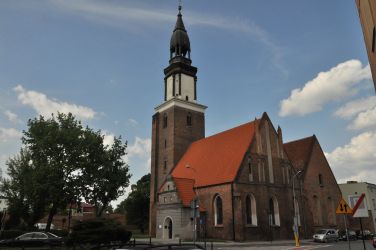 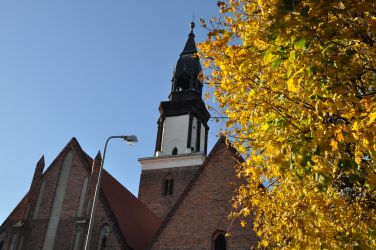 The first one, St. George’s Church was built in the second half of the 14th century and belonged to the Canons Regular of Saint Augustine. The second one, Corpus Christi’s Church which was added to St. George’s Church after 1380, belonged to Slavonic Benedictines called also Th Slavic brothers [own translation]. It is believed that the Benedictine Church was established for Polish citizens of Oleśnica. Around 1400 the tower that also performeda defensive function (was located next to the city wall), was added to this church.

As the Benedictine order was facing some difficulties and the number of monksdiminished, eventually there wereonly three of them, Johann IV Roth, Prince- Bishop of Wroclaw, fulfilled the will of the Dukes of Podiebrad and in 1505 incorporated the Benedictine Abbey to the Augustinians Provostrie. After some time, both churches’ constructions were combined by demolishing the border walls. The main alter was located on the north wall of The St. George’s Church.

After the introduction of Protestantism in Oleśnica (1538) the Augustinian monks left the abbey, and the poorhousewas established there. After 1555 the Church became a protestant church of the Blessed VirginMary and St. George. In times of Charles II Podiebrad (1609) the church was renovated, and a church porch was added.

In 1703 Christian Ulrich, the Duke of Württembergendowed a pulpit retable and a ducal loge seating. In the 17th and 18th century the old abbey buildings that were standing next to the churches were demolished.

From the 16th century till around 1780 (other dates are also mentioned) there were protestant masses for Poles in this church. The sermons werepreached by Jerzy Bock - Polish pastor in Oleśnica, Oleśnica’sarchdeaconand a poet who wrote in Polish, a translator and propagator of Polish language. After his death in 1690, he was buried next to the Blessed Virgin Mary’s Church. His gravestone survived till 1936.

From around 1850, the church received the status of garrison’s church. It was fully renovated in 1933. In January 1945 the church, its interior with wooden Gothic figures, galleries, the ducal loge seating, church’sorgans, and epitaphs were destroyed by fire. Only the tower, although very damaged, survived.

The two churches before 1965 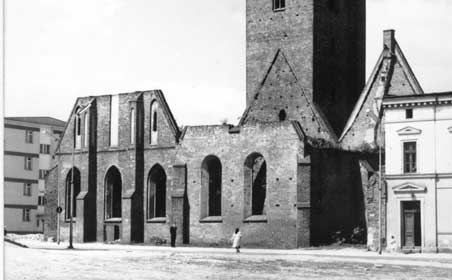 Between 1966 and 1970 the City Hall arranged new roof to be laid, the walls to be restored and the tower to be renovated. Therefore, the monument was maintained and was no longer a postwar ruin in the city. The churches were again divided by a wall. The former Blessed Virgin Mary’s Church from 1968 has been used by the Orthodox believers. Nowadays it is The Orthodox Church dedicated to The Dormition of the Holy Mother of God

In 2001 the City Council of Oleśnica arranged a partial renovation of the unused former St. George’s Church. The roof was fixed together with the gaps in the brick walls. The gaps were filled in with a specially burn-up bricksto resemble the Gothic one that were used in the original construction of the church.