This small church has a rich history, which is still being discovered.

Originally, it was a synagogue built by Jews probably in the 14th century and was mentioned for the first time in 1417. It was an orientated, Gothic church with two aisles and two pillars that were supporting six vaults. It is said that it was based on a synagogue in Prague as the two buildings were very alike. 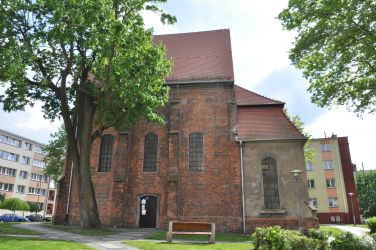 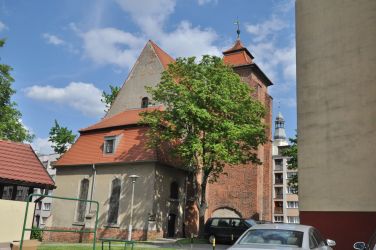 In 1530 the synagogue was renovated, and it may be then, when the foyer was added. After the Jewish community was driven off the city in 1535 it served as a city’s arsenal and then as a warehouse. 160 years later the building was rebuilt and became St.Salvator Pentecostal Church. Probably at that time the foyer’s wall became a base for the new tower.

During the fire in 1730 the church was burnt down, and the vault collapsed. It was renovated in the Baroque style four years later. The church was an endowment by Duchess Juliana SibyllaCharlotte (the wife of Charles Frederick, the Duke of Württemberg). The new helmet was added to the tower at that time (the flag is dated 1733) and the Baroque portals.The windows were remade, the interior was renovated. Instead of the damaged groin vault supported with pillars, the wooden barrel vault was added, and pillars were removed. The new elementslike (the alter, ducal loge seat, choir, galleries) and decorations were added.Probably then a new extension was added to accommodateall that together with the stairs.Since then, the church served as a classroom for religion lessons and as a place where masses were celebrated.

The St. Salvator Church was not very popular among the followers and probably that was the reason it changed its purpose. Between 1813-1824 it served for military purposes and later even city’s offices were planned to be there. Between 1905 and 1910, after the catastrophe of St. John’s Church, it served again as a religious place.

The current view of the church:

After mild war damages that did not cause the burn down of its interior - the church’s roof was renovated in 1960 and between 1968 and 1969 the church was fully refurbished.

The contemporary view of the church:

The church is a valuable, late-medieval object and due to this reason, during the contemporary city’s development plans, it was decided to be more exposed. After the renovation it was handed over to the evangelical parish in Oleśnica. Nowadays it is The Pentecostal Church.